Bottom pressure recorders (BPR) have long provided scientists with critical data about the ocean. But until now, their ability to gather data has been time-limited and hampered the ability to look at large and long-scale trends. Our Fetch AZA is now set to change the game by providing the capability to measure bottom pressure more accurately and for longer.

It’s often said that the ocean is the earth’s climate engine, and many would agree. That’s why understanding our planet’s major ocean currents is a critical element of ocean and climate science. The ocean is a big place, however. Deploying and retrieving sensors into it costs, especially when they have a limited lifespan due to calibration requirements.

The researchers, at the Scottish Association of Marine Science (SAMS), based in Oban, Scotland, are studying the Atlantic Meridional Overturning Circulation (AMOC). The AMOC is a large system of ocean currents in the Atlantic Ocean. It is driven by differences in temperature and salt content (i.e. density) that act like a vast “conveyor belt”, redistributing oceanic heat and influencing global temperature distribution, sea levels and carbon absorption. 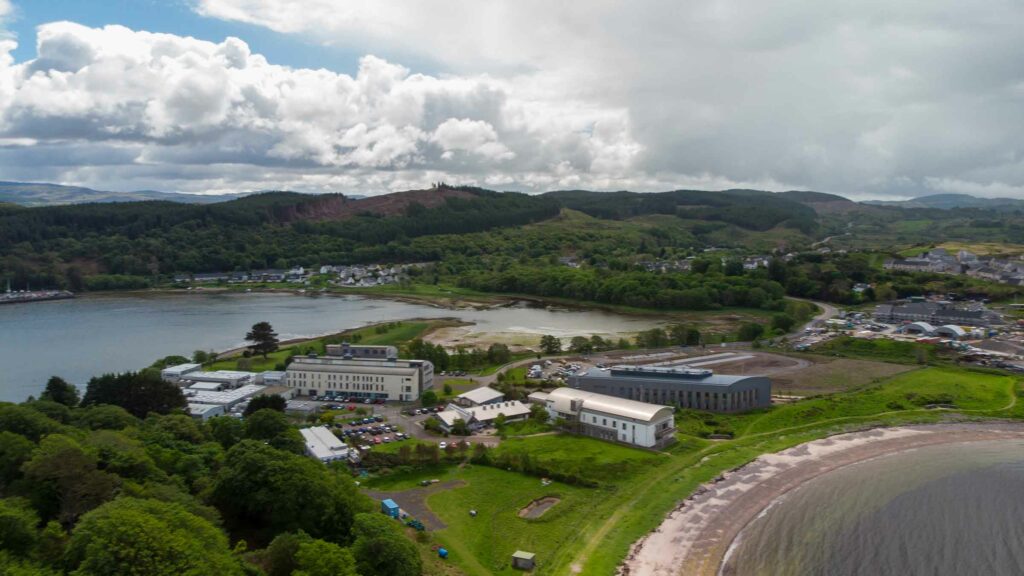 It is thought to transport roughly 1.25 Peta (10^15) Watts of energy from the tropics towards the subpolar and Arctic regions – more than 60 times the present rate of world energy consumption. However, relating climate variability to the AMOC is dependent on a vast array of sensors spread across the Atlantic. Continuous measurements using these instruments, deployed on the seabed and on moorings in the water column, have only been recorded since 2004, and understanding of this relationship is still evolving.

The instruments deployed across the Atlantic include ocean bottom pressure recorders. “By looking at the difference in pressure across the Atlantic, researchers can calculate the velocity of water, and therefore volume, flowing across this massive area,” explains Geraint West, head of science at Sonardyne. “But all pressure sensors are subject to drift, which means they have to be regularly recalibrated, taking up valuable vessel time and cost, as well as interrupting valuable time series datasets.

“Now two of our instruments, placed either side of the Atlantic, near Scotland and Newfoundland, will give scientists a longer-term and more sustainable way to measure the massive meridional (i.e. south-north and vice versa) flow of water across this vast expanse – or any other large body of water for that matter.”

The two instruments are our Fetch AZA (ambient-zero-ambient) instruments. These incorporate long-endurance pressure sensors that are able to produce centimetric-scale pressure (depth) measurements down to 7,000 m deep. They’re able to do this, without sensor drift, for up to 10 years at a time, thanks to the AZA self-calibration mechanism. This is a unique control system that periodically cycles the pressure sensor from ambient seabed pressure to near-zero, enabling comparison to a highly accurate low-pressure reference sensor for calibration. The reference sensor is never subjected to ambient pressure and is accurate to changes of less than a millibar, or about 1cm of head of water.

Fetch AZA also contain an acoustic modem, so data they gather, which can include third-party sensors, can be wirelessly transmitted to a ship up on the surface. Uncrewed vessels can be used to do this, again reducing reliance on crewed vessel support.

Focusing on the geostrophic balance 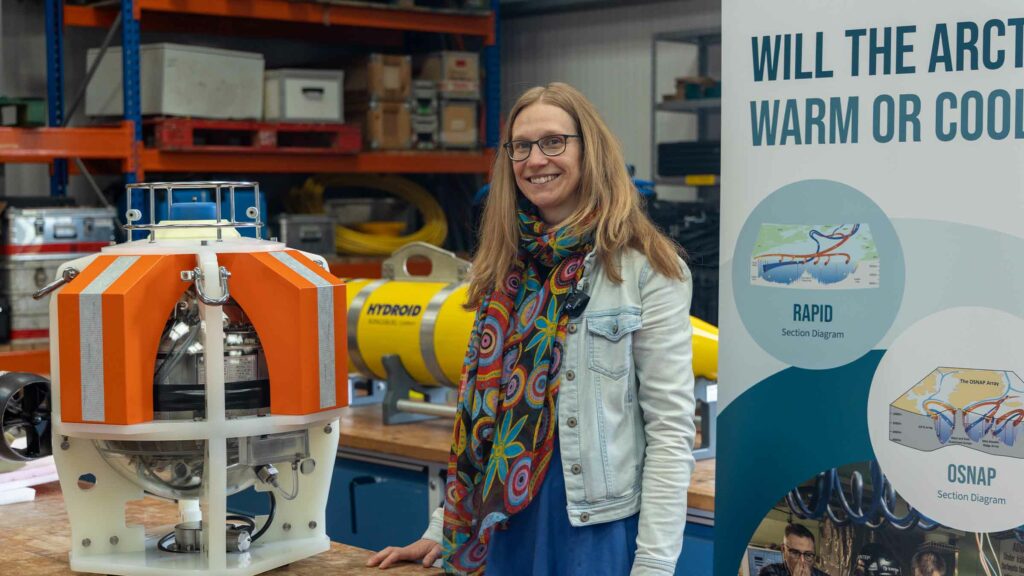 Dr Kristin Burmeister, co-chief scientist on the SAMS project explains how the two instruments will be used to gather the meridional velocity data they need for studying the AMOC: “Think about the daily weather report: Here, in the UK, when there is a low pressure system in the west and a high pressure system in the east, we will experience a wind along the isobars blowing from the south towards the north between the two pressure systems. The larger the difference between the two pressure systems is, the stronger the winds are. This is what we call a geostrophic balance and it works exactly the same for ocean currents.” To explain further, geostrophic balance is when the pressure gradient force and the Coriolis effect of the earth’s rotating motion balance out, forcing the air or water to flow parallel to the pressure isobars (the direction of flow will depend on which hemisphere it’s on). 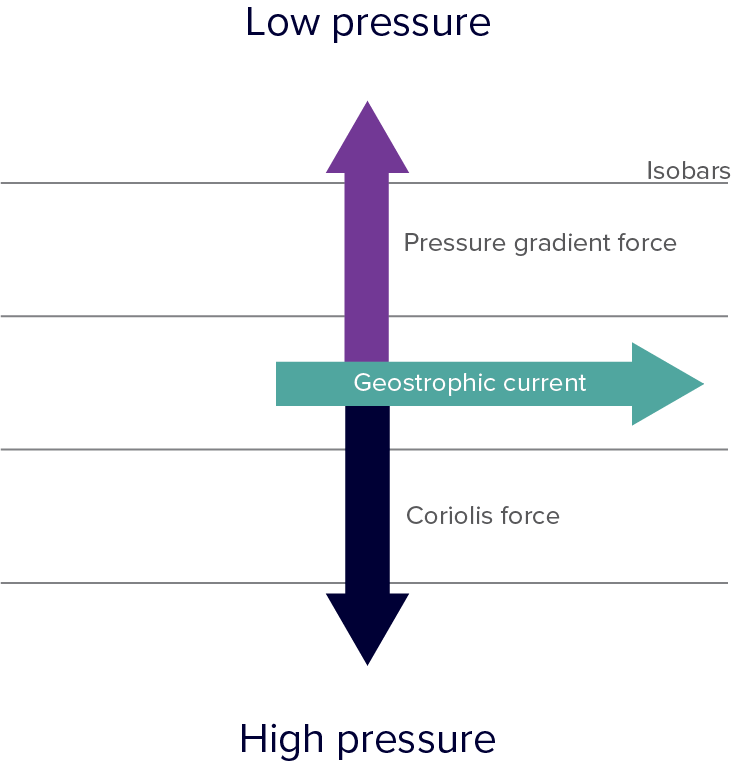 “The bottom pressure observations gathered by the Fetch AZA instrument allows us to calculate the strength of the current flowing along the isobars between the two bottom pressure recorders. And as they are drift-free, we can now measure the very small but important climate relevant long-term variability of the current which was not able with previous bottom pressure sensors as they experience a large drift.”

It’s an exciting new application for Fetch AZA. “This is the first time that this instrument will be deployed (in ocean physics),” adds Dr Burmeister. “It will stay in the water for 10 years and data will be harvested remotely via an acoustic modem, without the need to recover the instrument. This opens a whole new way of sustainable, basin-wide volume transport observations. This is unprecedented for bottom pressure measurements. Because the sensors are drift free, the smallest changes over a long time period, like a continuous trend, will be identifiable within this new data. Before we could only study changes on time scales shorter than the deployment period.”

Sonardyne’s involvement in BPR technology covers a range of important applications. These include  Tsunami detection, following the tragic events of the 2004 Boxing Day tsunami. The oil and gas industry also use them as  an effective, low-cost way to undertake seabed deformation monitoring at offshore hydrocarbon reservoirs. Similarly, ocean scientists are using them to monitor geological plate tectonic activity and risk.

In order to support these diverse uses, Sonardyne has continuously invested in developing the accuracy of these sensor, the heart of which has been a pressure sensor characterisation capability. Sonardyne’s AZA capability is the next step in this process, unlocking further applications and new potential for science.

“While it has only been out in the field for a relatively short period of time, Fetch AZA has been applied to an increasingly wide range of applications,” adds Geraint. “Over the past year, we’ve seen one of our AZAs deployed on a cabled array off Vancouver Island to monitor plate tectonic activity in the Cascadia Subduction Zone. Similarly, the University of Washington will be deploying one on their cabled observatory in the Pacific Ocean, offshore Oregon to monitor an active underwater volcano – the Axial Seamount. The same instrument will be part of a wider array that will also measure lateral seabed movement, as well as acting as a navigation and communication network for underwater vehicles.

“This demonstrates the capability and flexibility of Fetch AZA. It’s such an exciting capability and we’re forever intrigued to see the applications that scientists around the world find for it, to help unlock their research and further our understanding of ocean and climate science.”

But back to SAMS’s work in the Atlantic. Dr Burmeister’s work on the AMOC at SAMS is feeding into the UK element of a larger project, called the Overturning in the Subpolar North Atlantic Program (OSNAP). The UK-OSNAP, led by the National Oceanography Centre, is aimed at improving understanding of the circulation and fluxes of the North Atlantic Subpolar Gyre; a large system of rotating currents driven by winds, in a region between roughly 45°N and 65°N.

The gyre is a key component of the climate system because it is a region where the ocean warms the atmosphere (keeping North Europe relatively mild) and because it draws atmospheric carbon dioxide into the deep ocean.

Knowledge and understanding of the functioning of the Subpolar Gyre have increased, but ocean measurements have been patchy in time and space. OSNAP began in 2014 and is now looking to new sustainable methods for monitoring the basin wide circulation. Sonardyne’s Fetch AZA will be a key component of transitioning to cost-effective observing technologies so these vital climate processes can be monitored in a changing climate. 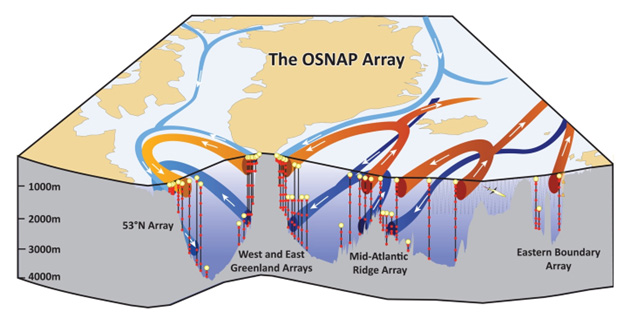 A schematic of the Overturning in the Subpolar North Atlantic Program Array. Warm currents in the upper one kilometer which flow north from the Gulf Stream and North Atlantic Current are shown in red. The warm water is made colder as it flows round the subpolar gyre and in the Nordic and Labrador Seas east and west of Greenland. The cold waters in blue return southward to the global ocean at depths of one to four kilometers. This is the overturning circulation. To continuously monitor the strength and structure of all these currents an array of moorings is continuously deployed between Newfoundland and West Greenland and East Greenland and Scotland. A mooring is a wire (black) from the seabed to just below the surface and is held taught and vertical by syntactic foam and glass buoyancy (yellow blob). Instruments such as current meters, and temperature and salinity sensors are fixed to the wires (red blobs).

Every two years, over a period of three summer months all the moorings are recovered during research expeditions. The data from the instruments can be downloaded for analysis We then deploy new moorings and instruments for another two years.

In the Eastern Boundary Array autonomous gliders, patrol regions where it is difficult to install moorings safely (mainly due to fishing). Gliders have an endurance of six to eight months and are deployed and piloted by SAMS. The Sonardyne Fetch AZAs will be deployed at around ~1,800m deep on the 53°N array off Newfoundland and in the Eastern Boundary off Scotland.

Get in touch if you think Fetch AZA could support your scientific research.