Why is BlueComm blue?
The general rule of thumb is whatever colour the water appears, that is the colour which will be least absorbed. Blue in clean water is the least absorbed electromagnetic wavelength, making it the obvious colour the lights in BlueComm should be using. But what about dirty turbid water I hear you ask? Well, dirty water tends to look brown/green. Maybe green would be a better solution for docks or estuaries like our Plymouth test facility? With the current level of LED technology we don’t believe so. Green LEDs just aren’t as efficient as Blue, so what we lose in absorption, we make up for in overall emitted light.

How does turbidity affect the performance?
Turbidity is the cloudiness or haziness of a fluid, meaning the turbidity of the water has an effect on the maximum operational range of BlueComm. As I’m sure you can imagine, there are a whole host of different particles in the water from sand to silt to microorganisms, each of which has a different effect on the light we transmit. Some particles absorb and some practices scatter the light.

Various scientific studies have shown open sea conditions to be consistently low turbidity. These results have been backed up by our own operations and trials in the Atlantic, Mediterranean and North Sea, with BlueComm 200 achieving >100 m range during each operation. This has shown us how BlueComm can be used to great effect in the open sea. 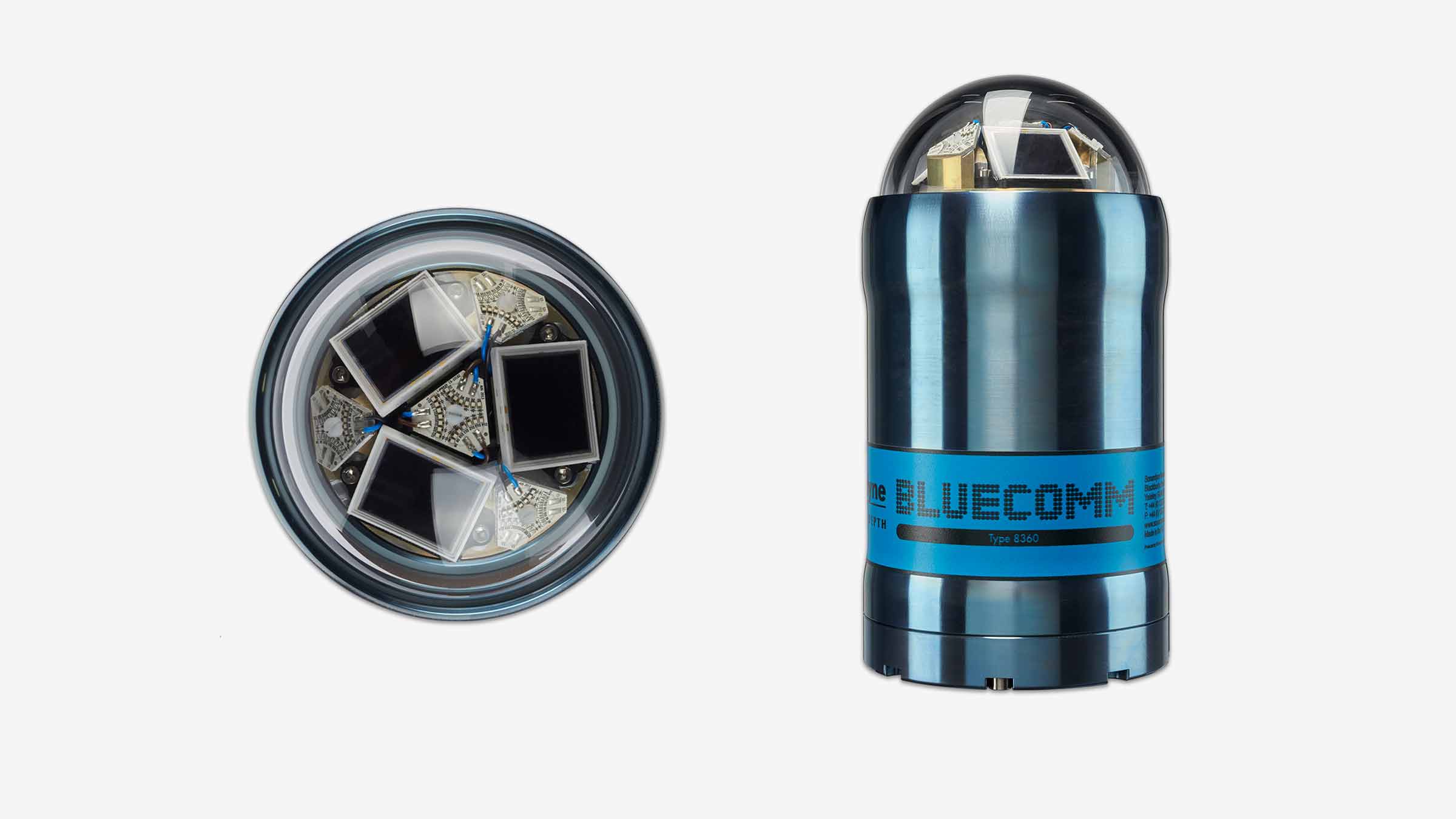 Moving into locations where the water doesn’t flow as well, like ports or in silty river estuaries, the quality of the water clarity decreases. As the quality of water clarity decreases, so does the maximum operational range of BlueComm. In these situations we would always suggest doing a survey of the local water quality using a blue light transmissometer so we can calculate what the possible maximum operational range would be.

One common question we’re asked is, “We operate in the open ocean, but what if an ROV stirs up a lot of silt?”. When an ROV stirs up silt it tends to be at a localised spot (10-20 m2) and not the whole operational area. Thus most of the water the light is traveling though is still relatively clear. During testing in a localised spot of turbidity has only had a small effect on the BlueComm’s maximum range.

How does ambient light affect the performance?
Fun fact: Your eyes are incredible in their ability to see during the day and night. During the height of a summer’s day, 1,000 Watts per square metre (W/m2) is being received from the sun yet during the night only 0.001W/m2. That’s a difference factor of a 1,000,000!

BlueComm produces an optical point source of 6 Watts of light, so it’s easy to see how that could get drowned out by the sun’s light emissions. Ambient light is the ambient noise of the optical world.

As you decrease the amount of ambient light, however, the range increases. So, BlueComm 200 will go from a couple of meters range in full sunshine to 150 m in perfect darkness. Typically, BlueComm 200 in open ocean shallow water with just moon light will achieve 100 m, whereas in darkness it will get to 150 m.

A Common question is, “We operate in the deep sea but how do ROV lights affect the performance?”. Although not as powerful as the sun, ROV lights can affect BlueComm 200. From experience, a Work-class ROV with either halogen or LED lights limits the range to ~40 m. To combat this we provide in-sync white light emitters to replace ROV lights. The in-sync white light keeps the full 150 m maximum range available.

However, we understand our in-sync white light emitters can’t replace all the halogen lighting on an ROV, so to help combat the ambient light problem we released BlueComm 200 UV. BlueComm 200 UV, as the name suggests, uses UV light (not of the dangerous variety) rather than Blue light. Although the maximum possible range will be reduced to 80 m, it will operate at that range in all deep-water ROV lighting conditions.

How stable is the data?
As explained above, the maximum operational distance is defined by both turbidity and ambient light. The below graph shows some practical data from a trial. Note the maximum range has been limited by both ambient light as the operations were at 2.5 m deep during the night and turbidity to 70 m. The graph shows how the data transfer performance changes over distance.

The blue line is the data rate between the two BlueComm 200s under test. As can be seen, it is constant and stable up to 60 m. At 60 m the number of photons being received gets close to the ambient light level. The system starts to struggle to distinguish between ambient light and the BlueComm transmission. The red line shows how the errors increase quickly at the maximum distance and the data rate reduces dramatically. 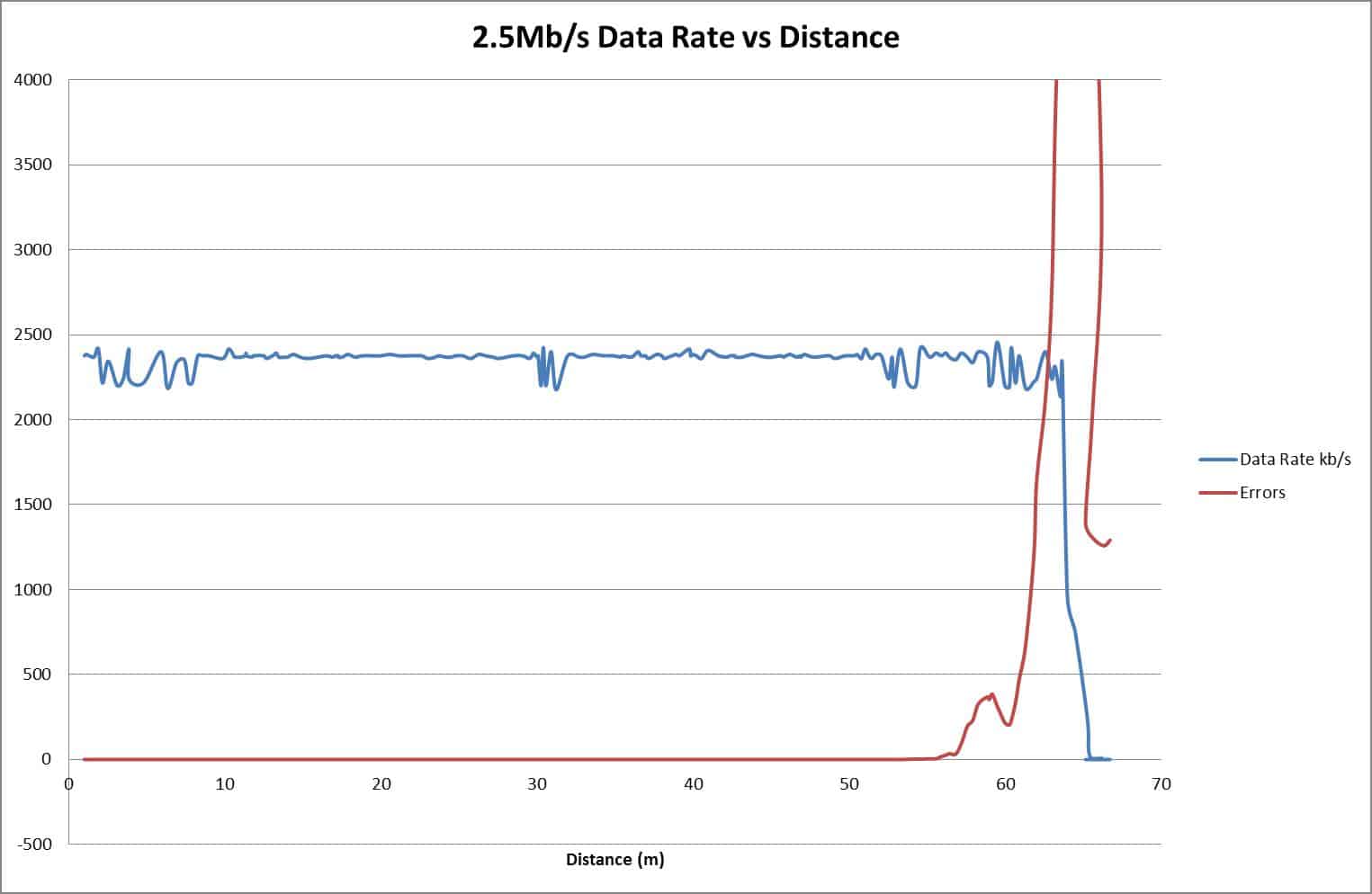 If you would like to find out more about our BlueComm, you can read more here.

If you would like to talk to us about how BlueComm could work for your next project, please get in touch.