How can we help?

How far can my Compatt 6+ be above the seabed?

When Compatt 6+ transponders are deployed, they can be installed at varied heights off the seabed depending on the method of deployment (stands, floats, etc).

Stands offer greater stability but are restricted to typically 2-3m height off seabed, whereas floats allow the Compatts to be deployed much higher off the seabed.

There are several reasons why you would install Compatts higher off the seabed, these include:

We use specialist software, RayTrace, and sound velocity profiles from worksites to determine the optimum Compatt height off seabed. Sound waves move towards lower velocity areas so ray paths bend in the water column. RayTrace allows an estimation of the maximum achievable baseline range and presents this in graphical form. See below the images from RayTrace software which shows how height above the seabed affects the maximum Compatt to Compatt range. The first image demonstrates Compatts 2m off seabed with a 1200m maximum separation, compared to the second image where the Compatts are 5m off the seabed and can achieve over 1800m maximum separation.

However, using floats means that there will be slight movement (deflection) of the Compatts due to ocean currents. Sonardyne performed an analysis of deflection of low drag and square sided floats to determine the amount of movement at different length strops (height above seabed). The full results of this study can from survey.support@soanrdyne.com. 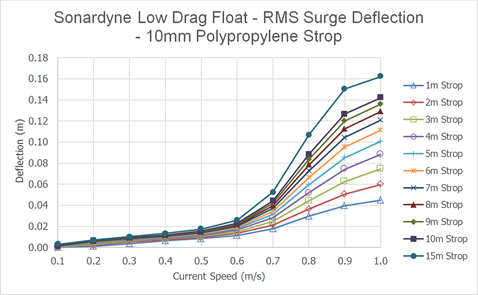 Then speak to one of our team for expert help