As I discussed in my previous blog, while operators do take care to prevent leaks from occurring, they can and do happen. When they do, they reach the public domain with the understandable and expected negative response and the resulting financial consequences on the companies involved.

Early identification and location of a leak can mitigate the impact. But, depending on the type of asset that needs monitoring or where a seep or leak is thought to be, very different approaches may need to be taken to ensure a timely intervention.

Previously, I identified two types of asset, each of which requires a different monitoring strategy. The first strategy, which I have already covered in detail here, is for specific assets, such as wellheads and their associated structures, which are contained within a limited area. For these, continuous, static, 360 degree monitoring, using our Sentry IMS, provides an automated, near real-time early warning system for any integrity breaches. Continuous monitoring could be employed throughout field life or during a specific phase, such as drilling, as you can read more about here. 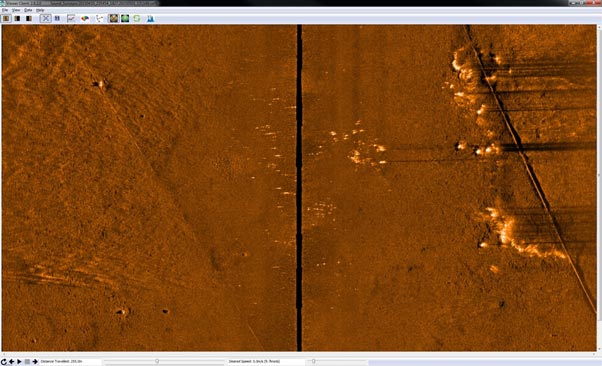 The second type of asset, which I’ll cover in this article, is for wider seabed areas, where hydrocarbon or CO2 seepage can occur anywhere within the wider field development. This could be naturally or from an inability to control the reservoir or overburden pressure, or where monitoring is required at emergent underwater carbon capture and storage (CCS) sites. It could also be where subsea infrastructure is more widely distributed, such as along pipeline corridors.

Where natural seepage or leaks occur at an unknown location across widely spread infrastructure, mobile monitoring is the preferred, if not the only, solution. Critical to this strategy, however, is the ability to cover wide areas and gather high resolution data efficiently. This means a need for low power but high resolution imaging systems, compatible with and capable of automated leak detection and reporting.

Quite simply, Solstice can map more – and more accurately. This is because it uses a back-projection beamforming technique to focus at every single pixel in the image, as well as accounting for platform motion to produced amazing undistorted imagery with real-time array calibration. With more accurate data, you improve the probability of positive detections using carefully designed and tested on board computer aided detection and classification (CAD/CAC) and automatic target recognition (ATR) algorithms. Better detections mean you get the results you need faster. This is why Solstice is a popular tool in mine hunting operations – where time is critical. 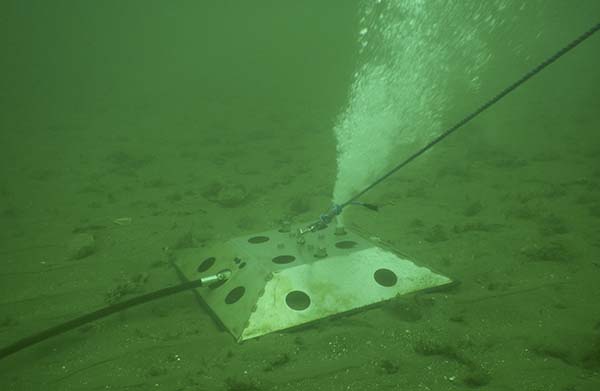 For both leak detection and mine hunting applications, the ATR algorithms ‘score’ detections or regions of interest and then save small ‘snippets’ of metadata along with the sonar image data.  During the AUV mission these snippets can be automatically transmitted to a following USV or conventional vessel or, alternatively, downloaded when the AUV surfaces. From there these snippets can be sent to shore, via satellite for further interpretation. Onshore, an operator can then request the highest scoring leak images, allowing a high confidence of detection while the survey progresses.

What’s more, other sensors can also be fitted to your AUV, such as physical and chemical instruments, which, along with the Solstice and navigation data, can also be processed in real-time to cross-reference and validate any detected anomalies for sending back to shore via satellite.

The data is impressive, the low power budget is impressive – and it all comes in a just 682 mm-long, 95 mm deep, 760 g (2.11 kg in air) package. This provides options. On a long endurance AUV, the low power consumption enables significant areas to be covered over extended time periods. On a smaller AUV, its small footprint means you can also quickly mobilise a detection capability capable of covering a large area in a small period of time. So you can both have a persistent monitoring presence in your field or quickly and cost-effectively deploy a leak detection asset to a problem area to locate an integrity breach. 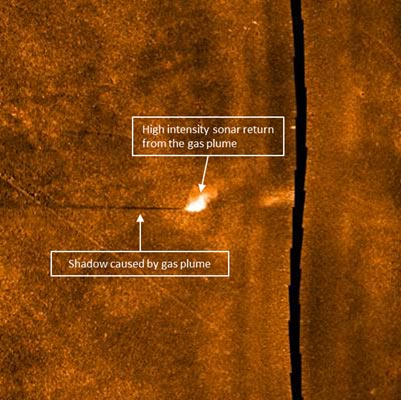 Solstice is proven. It’s already been used on a number of projects detecting both simulated CO2 leaks in the North Sea and natural methane seeps. During a methane seep detection project we were tasked with detecting naturally occurring seeps from the ocean floor offshore California. As shown in the image above (at 200 m swath), side scan data collected from a Solstice mounted on a Bluefin AUV, the shape and height of the methane plumes close to a pipeline are clear as indicated by the numerous horizontal dark shadows crossing the diagonal pipeline on the starboard channel. Some of the seeps can also be seen to be emanating from pockmarks further away from the pipeline, i.e. closer to the AUV centreline.

In another project, Solstice’s ability to detect CO2 leaks was put to the test. A test target emitting 15 litres of carbon dioxide a minute was placed on the seafloor for the trial. Our Solstice imagery clearly shows the plume rising up from the seabed by the shadow it casts caused by the obstruction it makes in sonar data return. You can read more about that project here.

Solstice is also regularly used in other AUV-based seabed search and mapping operations, such as mine detection. In fact, Solstice comes as standard on General Dynamic’s Bluefin-12 and Bluefin-9 AUVs. And, onboard the Bluefin-9, it’s the most powerful sensor package for a two-man portable AUV.

Solstice offers data quality and resolution like no other side scan sonar of the similar size, weight and power. This means you can respond faster, cover more of your assets for less, long term, and with high confidence in the results.

For oil majors’ who have environmental awareness and hydrocarbon containment firmly in their sights for 2025, these are tools that can realise that vision today. Automated monitoring with Solstice is here, proven and available.