Underwater tracking…how far can we go?

I have been working with underwater tracking systems for over 10 years now, and it’s not an easy task to replicate the deep ocean environment to test our Ultra Short BaseLine (USBL) systems to the limits of their performance where we are based in the UK.

Because of this, I decided to take it into the field, offshore, to test and demonstrate the capabilities of our LMF (Low-to-Medium Frequency) USBL technology and how it can be used to perform

Sonardyne’s LMF USBL system is based on existing MF technology, the only difference is the operating frequency.
If you were to take an LMF transceiver and an MF transceiver, side-by-side it would be hard to tell the difference.

Our LMF USBL systems looks a lot like our MF (Medium Frequency), in fact, if you put them side-by-side they are hard to tell apart. The clever detail that sets the equipment apart is in the design of the transmitter and transducers. That’s what enables us to push the kit to its limits to achieve longer tracking distances.

To push our USBL tracking system to see how far we can track underwater. 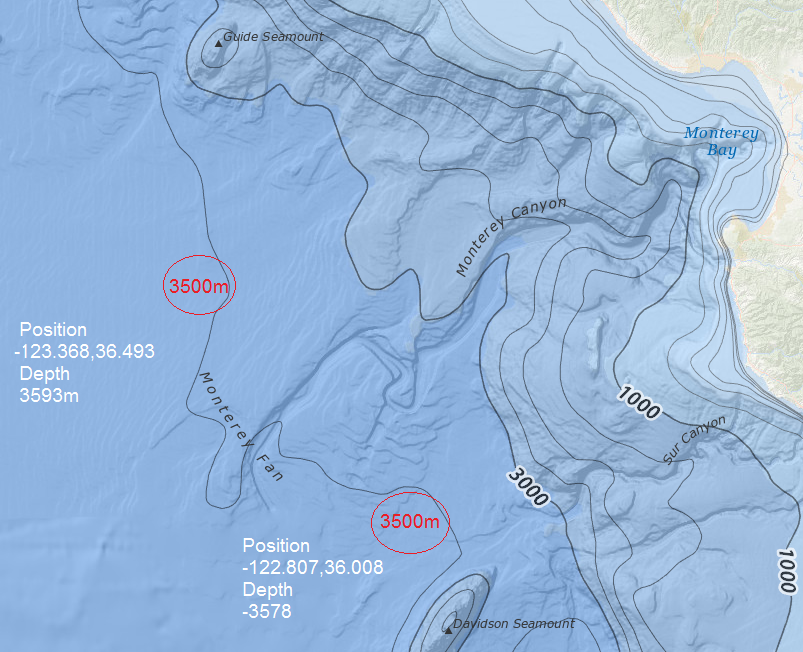 We had the fantastic opportunity to conduct the trials at the Monterey Bay Aquarium Research Institute (MBARI) based in California (it was a challenge, but I was willing to take one for the team!). MBARI was the ideal trials facility because of its accessibility to deep water and modern, high-spec research vessel, including two deployment poles for our use. This was the R/V Rachel Carson.

The deployment site chosen was 3,500 metres deep and located about 130 km from the coast, beyond the Monterey Canyon.

One of the key targets was to test the system with a realistic set-up that a customer could buy off- the-shelf. There was no point in creating expensive, custom solutions when we are trying to solve a problem that a lot of our customers have. The system comprises an omni-directional LMF Compatt 6, which was deployed in a floatation collar, to be used as the target, and an LMF HPT transceiver. The LMF Compatt 6 provides the greatest operational flexibility when the geometry could be anything from vertical tracking to long lay back horizontal tracking. This put a restriction on the source level of the transponder, and had a knock-on effect of the overall range achievable; however, the setup would prove the versatility of the complete solution.

The system was modelled to predict the expected performance in terms of overall operational range, as well as precision and accuracy at these ranges. Based on signal losses alone, the predicted range of operation was 12,000 metres slant range, however this was influenced by external factors such as the noise footprint of the vessel. The world ocean atlas aided the modelling, providing a reliable sound velocity profile for the trials site.

After a seven hour transit which mainly consisted of setup, catching up on sleep and the odd bit of whale watching (one of the perks of the job 😆 ) the LMF Compatt 6 transponder was deployed under ideal conditions.

The LMF Compatt 6 transponder free-fell to the seabed in about 30 minutes, during which the spiralling of the beacon through the water column could be visibly seen on Ranger 2 USBL tracking system. 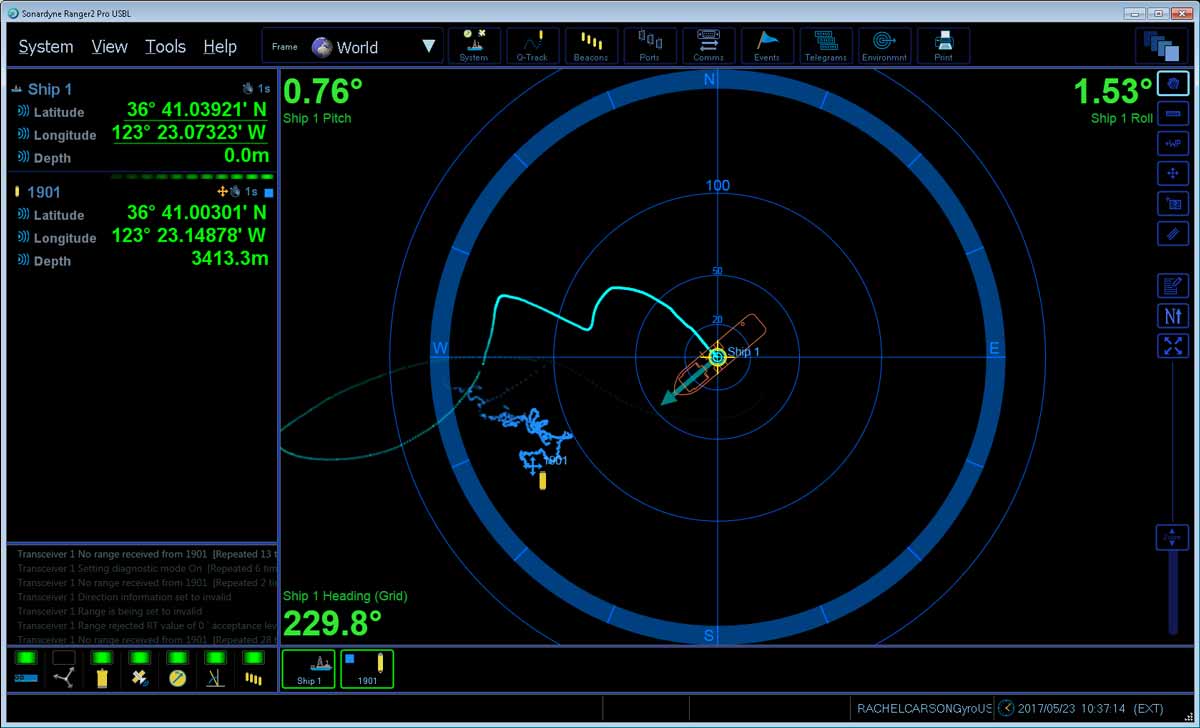 After this, a Casius calibration was performed on the system to ensure offsets were correctly set and to verify the positioning performance directly overhead of the transponder.

The results showed a performance typical of MF, which is not that surprising as the LMF frequency of 15 kHz is only 5 kHz away from the bottom of our MF band. 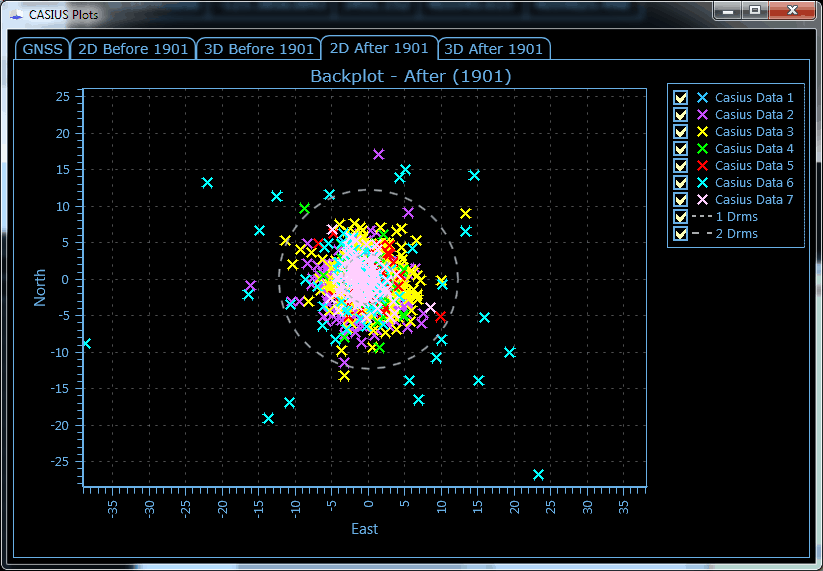 After this verification we could start work on what we came out to prove. How far can we track underwater?

The vessel headed out to the west for another 10 km whilst the LMF transponder was tracked and data gathered.

On a side note, and never one to miss an opportunity, during the run I wanted to test the high data rate telemetry (9000 bps), available within the HPT transceiver as standard, which uses our wideband and 6G technology. I was pleased to see that even at these longer operating ranges successful data transfer was achieved.

One difficulty of tracking at these ranges is the length of time needed for the signals to perform a return trip; at maximum range this was about 14 seconds. To overcome this difficulty, our Ranger 2 software which was used throughout the trial, was set to an update rate of three seconds which meant multiple ranging cycles were performed within one trip-time to give a true update rate of three seconds.

The system achieved robust tracking to a slant range of over 11,000 metres, eventually limited by the source level of the transponder, transmitting 193 dB at 15 kHz. 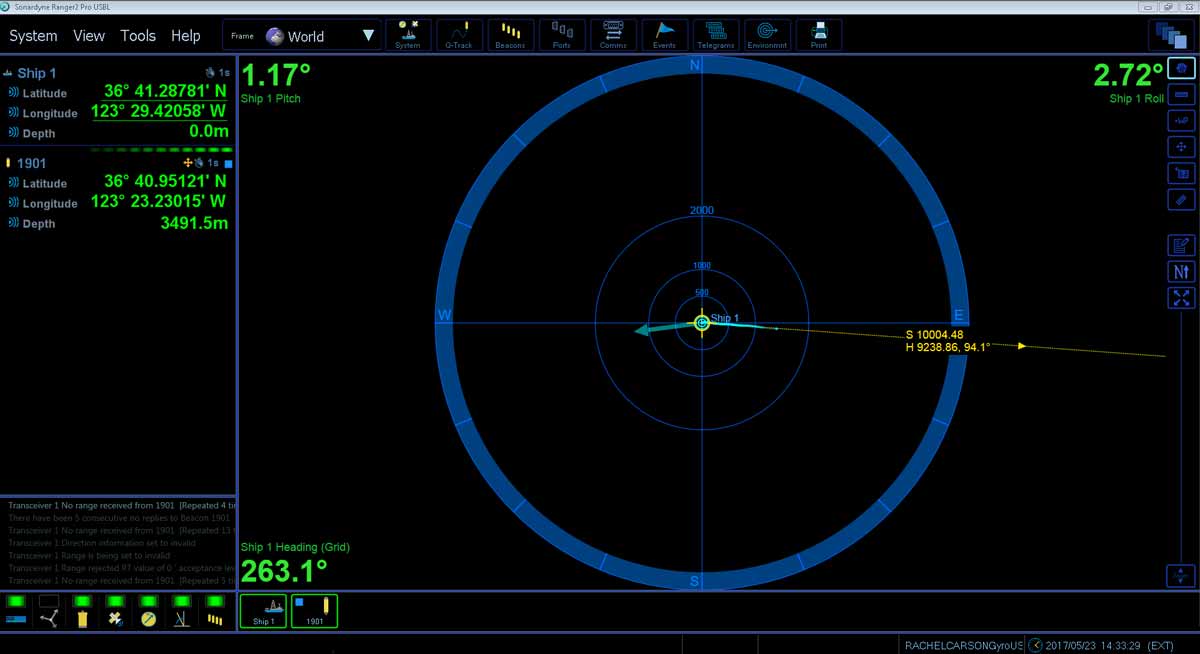 I was impressed with the positioning performance of the system and the potential to track at extended ranges. The tests highlighted that an off-the-shelf product has a multitude of applications where extended range is needed, whilst maintaining excellent performance.

The trial ended with the successful release of the LMF Compatt 6 transponder, but with an error on my part! I calculated the up-thrust incorrectly.  Due to extra weight attached to the transponder it meant a 1 ½ hour recovery rather than the 40 minutes predicted, much to the teams annoyance!

Sonardyne and myself would like to extend our thanks to the Monterey Bay Aquarium Research Institute for their support during the exercise which has helped verify real-world performance of a system able to track reliably in any ocean across the planet regardless of depth.

If you have any questions or would like to run through any of the trial in further detail, please get in touch, I would love to hear your thoughts.