Measuring depth in the ocean over long time frames has been out of reach for academia and industry alike. A new capability built into our Fetch seabed sensor changes the game. It’s a new breed of bottom pressure recorder that truly unlocks long-term monitoring capability.

Understanding small movements of the seabed, which may be only a few centimetres over a single year, are critical in many fields.

Such minute measurements are needed by scientists to get a better understanding of the earth’s tectonic processes. This is especially critical when it comes to the deep outermost areas of offshore subduction zones, where one tectonic plate moves beneath one another. Similar measurements also help offshore oil and gas production companies to understand changes in their reservoirs.

Over the last few decades, our ability to measure these movements, even in several thousand of metres of water depth, has taken great leaps.

We can measure horizontal movement to centimetric accuracy, using range measurements between instruments like our Autonomous Monitoring Transponders (AMTs). We can also position these sensors within a global reference frame.

However, measuring changes in vertical displacement has remained a challenge. This is due to the reliance on pressure sensors to measure depth, because, despite the best efforts of manufacturers, these all drift to some degree and can introduce errors in measurement. These errors can be of a similar magnitude to the actual subsidence and in some cases even greater.

This normally means we have to regularly recalibrate pressure sensors. But what do we do if we want to monitor continuously for many years, which requires leaving the sensors on the seabed?  Understanding the problem is a start.

We’ve therefore spent a lot of time building our knowledge of pressure sensors, as these are essential to depth measurement in deep water for a range of applications, from tsunami detection to seabed subsidence. As a result, we have a dedicated pressure sensor characterisation laboratory where we can screen all our pressure sensors. 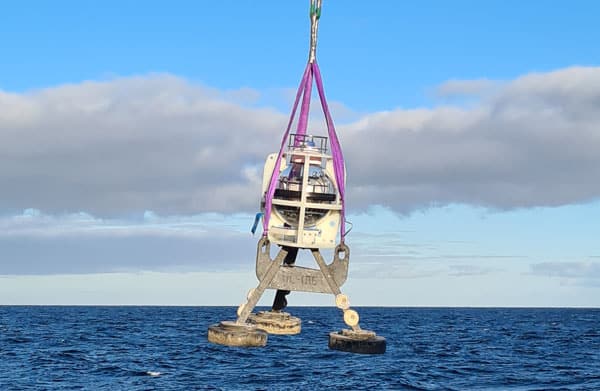 While pressure sensor characterisation goes some way to improving the accuracy of pressure measurements, a breakthrough discovery was made by Jerry Paros, founder of pressure sensor specialist Paroscientific. This is that drift is in fact a bias and it can be overcome by measuring that bias and then somehow removing it.

So we set out to find a way to allow a sensor to, on its own (potentially some 7,000 m deep on the seabed) reliably measure and therefore remove that bias. Our solution implements a concept called AZA, or Ambient-Zero-Ambient. It involves in-situ calibration of the pressure sensor. It’s a game-changing capability that now enables measurement of minute changes in seabed subsidence or tectonic activity with extremely high accuracy. We’re talking vertical seabed displacements of less than 1 centimetre per year over long periods.

It can do this because it’s a self-calibrating sensor – the clue is in the name. It uses a patented system of two motorised valves, a pump and a reference sensor to measure a depth sensor offset in situ, eliminating the need to recover equipment mid-deployment.

Fetch AZA is a revolutionary step-change, building on an evolution of our Fetch monitoring transponder. Fetch has been deployed all over the world’s oceans to great effect and has become a trusted seabed science instrument. It has an integrated telemetry module that enables data to be acoustically recovered from the surface, whether that’s from a research vessel, supply ship or uncrewed surface vessel (USV). It also has sufficient battery capacity for seabed deployments of up to 10 years at a time.

With AZA in the mix, we can measure the pressure sensor drift, and recalibrate in-situ, effectively enabling a 100 times increase in sensitivity of these systems.

Since first being tested on the Mars field in the US Gulf of Mexico in 2017, AZA capability is now being used in our Fetch AZA subsea sensor logging nodes for seabed settlement monitoring and measuring geological faults, movement of which could be another indication of earthquake and tsunami risk and is, again, another area where highly precise measurements are required over long periods of time.

SO HOW DOES AZA WORK?

The key point to keep in mind is that even the best pressure sensors that we normally use have an accuracy of ±0.01% of its full scale, irrespective of the scale value. Consequently, a high-pressure sensor, such as one we’d use for full ocean depth measurement, is less accurate in absolute terms than a low pressure one with a much smaller scale. The basic principle of AZA is therefore to perform a regular in-situ comparison between Fetch’s high pressure sensor, which has a full scale of several hundred bar, and a low pressure sensor of only a few bar. 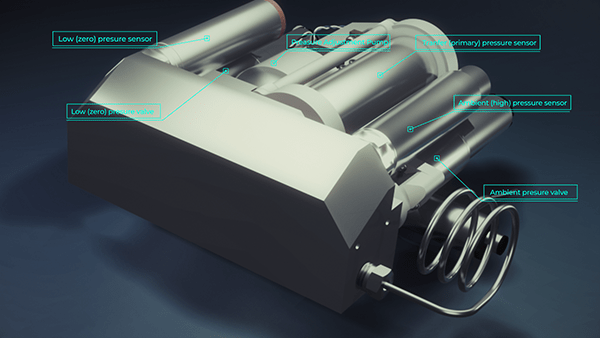 In addition, there are two pressure valves;

These valves are used to isolate the different sensors during the comparison measurement, as well as a pressure adjustment pump, which is used to control the pressure inside the manifold.

After completing this measurement process, the low pressure valve is closed and the pump piston is extended, which returns the manifold pressure back to ambient.

Then the ambient pressure valve is opened, which re-exposes the transfer sensor to the ambient outside seawater pressure. With both ambient and transfer sensors connected to external seawater, the instrument is back in its normal operating mode.

Watch the video to see this in action. As you can see in the video, AZA effectively calibrates the system to the much higher accuracy low pressure sensor, enabling us to measure the sensor bias. This in turn is used to eliminate pressure sensor drift in the primary pressure sensor.

Fetch AZA is the latest iteration in the development of our Fetch instrument. It still has the same functionality including an integrated modem, which enables remote data recovery and configuration of the instrument. All you need is a USV.

Furthermore, the ability to remotely time synchronise its internal clock, together with long-duration batteries, means sensors can be deployed for many years at a time, all of which enables the lowest possible carbon emissions and costs. 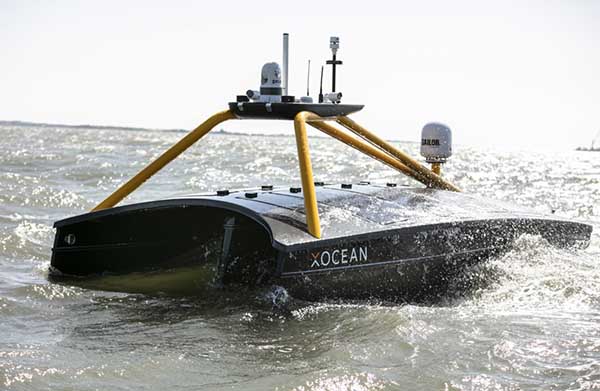 These capabilities have created an instrument that revolutionises seabed measurements, across ocean science and the commercial sectors. This means that scientists can now undertake measurements, at a resolution they’ve never been able to achieve before. These are critical to understanding tectonic processes.

In the commercial sphere, Fetch AZA now meets upstream production companies’ long-term goal of measuring 1cm/year of vertical movement across their fields. Such fine-scale measurement provides a powerful new tool for proactive reservoir management. This is a key enabler for maximizing economic recovery.